How to talk to your loved ones about Black Lives Matter

Remember why and who we are fighting for.

I have listened, learned and felt deeply over the last five months. Not only is the unmasked history of the United States inconceivable, but the current events that are unfolding are also quite hard to fathom. Wearing a mask to protect yourself and others somehow became political. Murder is legally “justifiable” if you do it with a badge on. And some of the friends and family that I have known for years are unrecognizable.

I was disgusted and heartbroken when I heard about Ahmaud Arbery, a 25-year-old Black man who was chased and murdered by two racist white men for jogging through their neighborhood. I signed his petition as soon as the public was made aware that Georgia officials hid his murder for two months. My heart broke all over again when I heard about Breonna Taylor, a 26-year-old Black woman who was shot eight times in her sleep because the police broke into her home, looking for someone they already had in custody. I signed her petition in May after Louisiana officials hid her murder from us for months, as well.

But George Floyd, a 46-year-old Black man, was slaughtered in broad daylight and the public video made it impossible to hide. The capture of his dehumanizing murder went viral and if you reacted like I did, you couldn’t continue watching 30 seconds into the nine-minute video. Let alone read the transcript of his final words. I signed his petition too and went to the streets so the world could see my intolerance to the inhumane treatment of Black lives.

Since the end of May, social media has been filled with countless examples of how racism and oppression against Black folx is just as prevalent today as it was 400 years ago. White supremacy is rampant in this country and many people are just discovering that uncomfortable truth.

As we learn about new injustices, we must commit to educating ourselves, exploring our privilege and using it constructively.

“Privilege” is a label that many people refuse to own, because owning it involves acknowledging that our comfort must be compromised for true change to happen. I am a queer woman of color who recognizes that I myself have privilege. Admitting you have privilege does not erase the hardships you’ve endured. It means that there are parts of your identity that give you an “upper hand.” Privilege can stem from many things — gender, sexuality, economic status, physical abilities, age, religion,  immigration status, gender presentation and much more.

As a first-generation mestiza Latina, I am well aware that racism is pervasive beyond white America. Nevertheless, I’ve been disheartened at times by my community's response, or lack thereof, to the BLM movement. When we say Black Lives Matter, by no means does that imply that non-Black Latinxs' lives do not matter. I am well aware of the strength it takes to come to this country and the endurance it takes to stay. But rebuilding a corrupt system that respects and values every single life wouldn’t take away anything from anyone. In fact, it would also protect our community from being racially profiled or targeted. And make no mistake, I want to abolish ICE, too.

Personally, I believe Latinxs, especially white Latinxs, frequently don’t see their part in the oppression and struggle. Race and ethnicity are not synonymous and a difficult pill to swallow is that the Latinxs can be both the oppressed and the oppressor. Colorism is rampant in our community and we hear “they’re Dominican, not Black” so often that we forget that the Latinx community is composed of all races. We cannot say Latinxs for Black Lives, because that erases the Black lives in the Latinx community, and too many people aren’t ready to accept that.

Before I tell you how to have a conversation with your loved ones about why they should care about fighting for racial justice,

I first advise you to take a deep breath.

These conversations will not be easy. But they are just as necessary as a signature on a petition or a donation to a fund. When you have these conversations, you have an opportunity to change the way people view history and more importantly, how they impact it.

When beginning the conversation, remember that people usually hate being told that they’re wrong.

It is instinctive to protect what it is you think you know and hold onto it dearly. So, make sure your tone is not one of “You are wrong” but rather, “What you have been taught is a lie. And it’s not your fault you were lied to. I was, too.”

First, ask them what they have been taught about Black history in America.

If they were born in the United States, it is more than likely they were taught a white-washed version of U.S. history. A version where the Civil War was fought for “state rights”, the civil rights movement was a hurdle in the ‘60s and segregation ended with a court decision. Many don’t know that Black folx were unable to vote because of literacy tests until 55 years ago and Black students couldn’t comfortably attend schools with white classmates until 56 years ago, and many still don’t.

The U.S. became an independent country in 1776, which was 244 years ago. So for 77.2% of this country’s history, Black people were unable to vote because of blatant voter suppression.

Ask them to think about that.

And after they’ve thought about it, tell them that voting was (and still is in many states) only accessible to people without criminal records.

This is extremely difficult, seeing as though police officers originated from Southern men tasked with capturing Africans who had escaped for freedom and protecting white “property.” Due to its racist origin, it is unsurprising that racism is interwoven in the fabric of the police system today (Trigger warning: Over 784 acts of police violence towards people of different ethnicities, ages and genders since May 29)

If they respond to individuals labeled as felons’ inability to vote with, “Well that’s what they get for breaking the law,”

it is because from a young age, we are desensitized to incarceration in this country and treat it as something that “bad people” deserve. But did you know that the United States has the highest incarceration rate in the entire world?

There are more than 2 million people in U.S. prisons right now. According to the Pew Research Center in 2017, Black people represented 12% of the U.S. adult population but 33% of the prison population, white people composed 64% of adults but 30% of prisoners and Latinx/Hispanics constituted 16% of the adult population and 23% of inmates. In 2018, the rate was 31% among Black people, 14% among white and 25% among Latinx/Hispanics.

If they tell you that Black people shouldn’t commit crimes then, show them this: 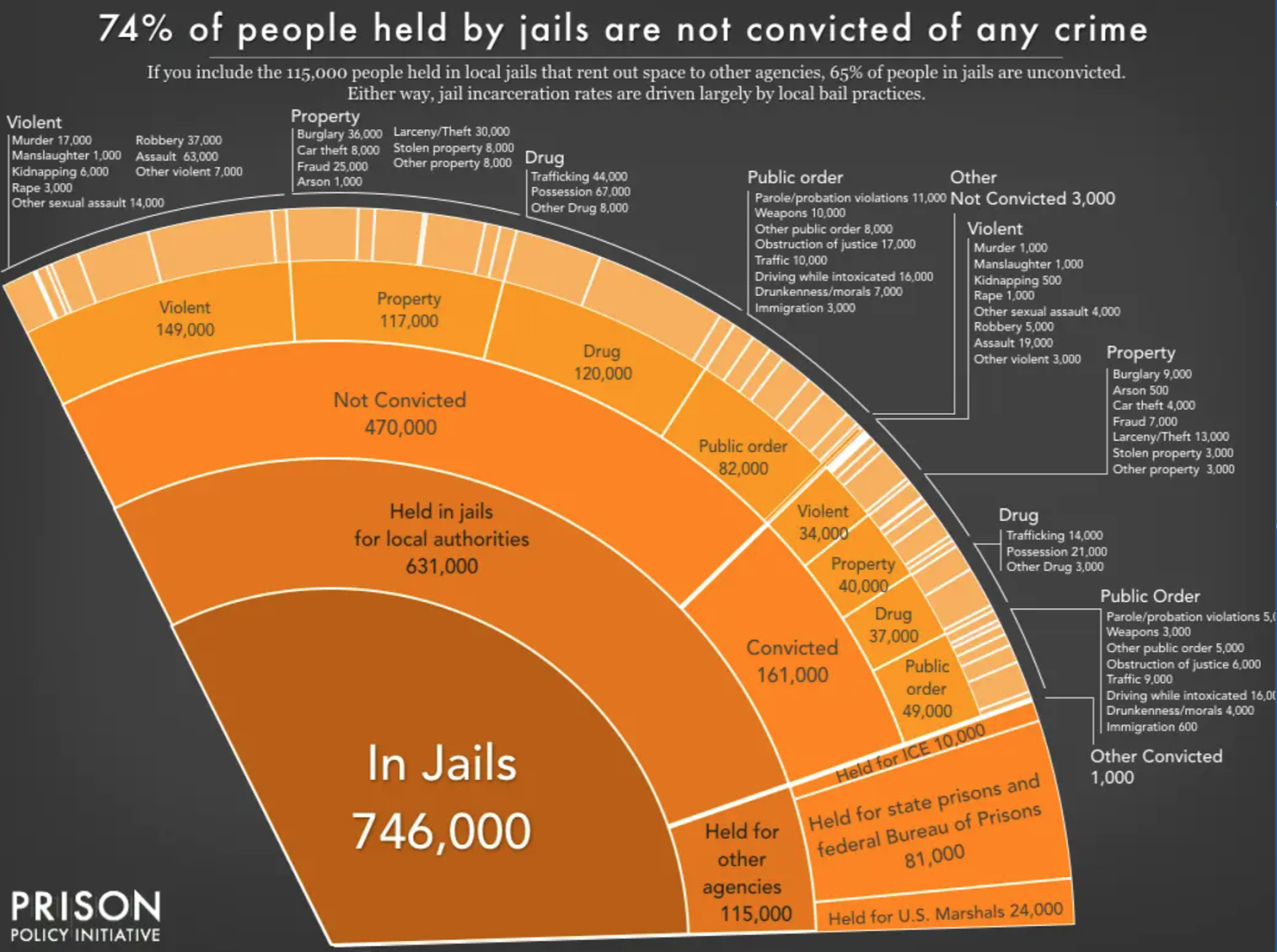 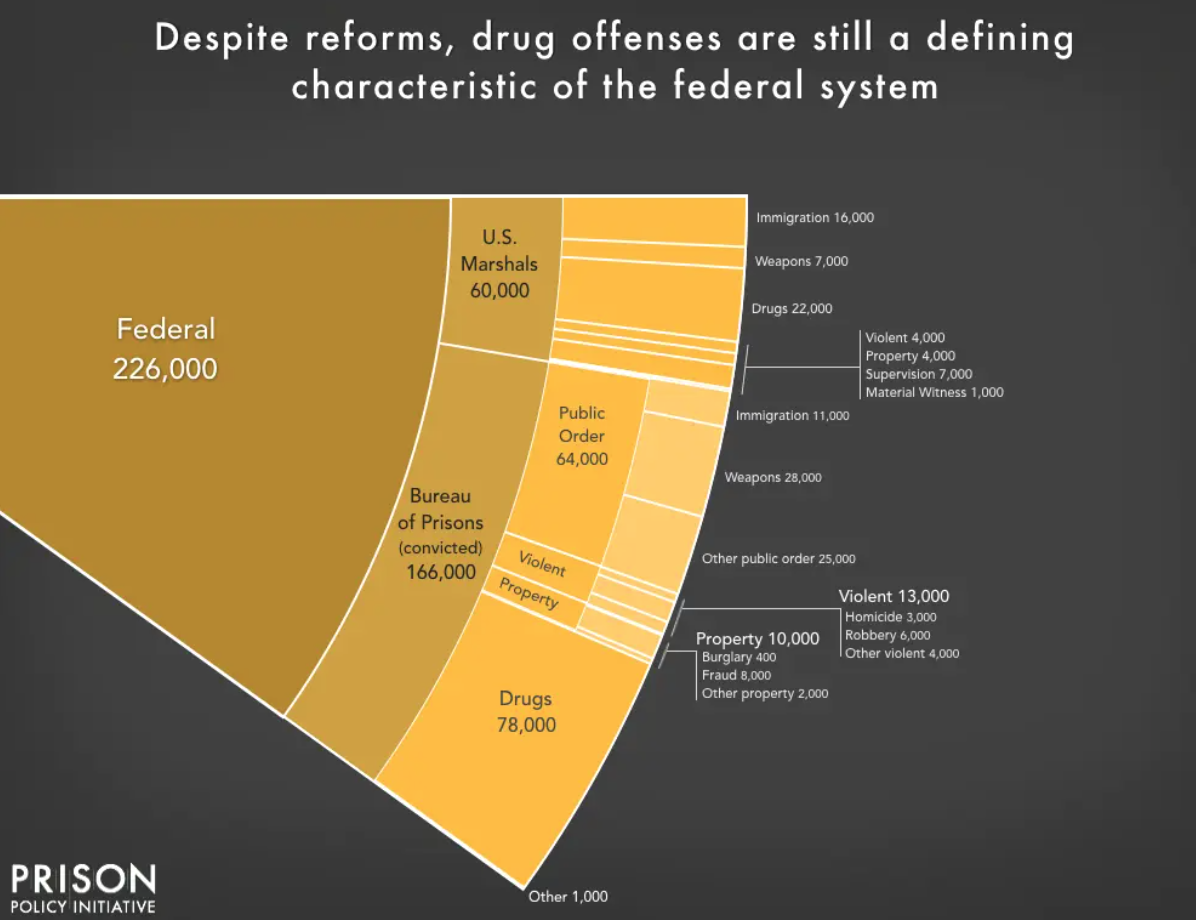 And if they say that Black people shouldn’t do drugs,

that’s when you can tell them that in 2013, ACLU concluded that a Black person is 3.73 times more likely to be arrested for marijuana possession than a white person, even though Black people and white people use marijuana at parallel rates. This is a symptom of the racist foundation the police system is built upon, as well as the over-policing of Black neighborhoods and the demonization of Black people who use crack but the tolerance of white people who use cocaine.

They might try to hit you with the old, “What about black on white crime?”

Tell them that in all homicides, the killer and the victim are usually from the same race.

Yes, the number of Black victims is lower than white victims but that is because Black people only make up 13% of the American population. A racist lie that is embedded into our brains in hopes of villainizing Black people is that they are significantly more violent towards other races. This is done to cause separation and fear, and sadly, it often succeeds.

The sad reality is that even after we give people these facts, some will still not believe.

Some will still not be willing or able to lay down their defensiveness and see that we are all implicated in a racist system. We can try to make excuses for them — they’re a product of their generation, they just believe what their parents say — but the truth is that they’re making a choice not to believe. We’re human and we hope that our loved ones care like we do. But at the end of the day, some of them won’t show up the way we want them to.

This is when you must conserve your energy.

Feel upset for a second and then let it go. Not because you’re giving up but because you’re saving your facts for a heart you will touch and a mind you will mold. This post is a mere fraction of the truth. There are so many other racist lies that we have to debunk. It is easy to learn new things, but it is hard to unlearn them. That is what anti-racism is founded upon: unteaching the falsehoods of stereotypes in hopes of opening up others to the truth. We must unlearn the falsities we have been taught.

Remember that you cannot change those who refuse to change, but you can change yourself.

You cannot undo hundreds of years of history in a matter of months, but you can continue educating yourself and others until the mark we leave on this world is unerasable.

And if you do get through to a loved one, the sense of fulfillment knowing that you helped guide someone in the right direction is like no other.

In a perfect world, this would be expected and the absolute bare minimum. But in our world, it is one more person who will contribute to the vanquishing of racism in this country. One more vote for the right candidate. One more voice to call out injustice.

Continue signing petitions. Keep donating to funds if you have the means to. Start having the necessary conversations. And most of all, remember why and who we are fighting for. This did not begin with us, but it can end with us.

Grace Romo is Rowdy Magazine’s Copy Editor. Her sun is in Libra, but she has an Aquarius stellium in her first house so she is internally a water bearer. When she isn’t writing poetry or taking pictures, she is listening to indie music way too loud. You can follow her on Instagram @msromoo for anti-racism tips and song recommendations.

The Earth Isn’t Political, But Politics Can Kill It

#EndSARS — What Is The Movement And How You Can Help